This post is part of the Antipodean contribution to Blaugust East. 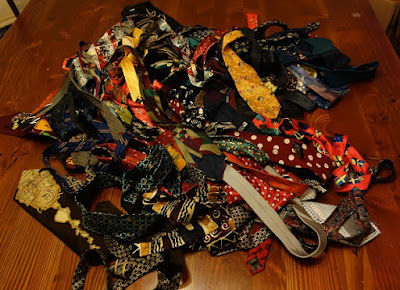 Last week we packed up our board games, and this week I hope that you'll help me pack up those most treasured of my possessions, my ties. Some major stakeholders have suggested that my complete collection of neck-ties doesn't need to travel to England, so we're doing a cull down to a more manageable six. In order to do so, I thought we'd hold an election, partly because it's much more fun to hold elections than it is to just pick, partly because we're into week two of Blaugust and we're looking increasingly hard-up for content, but mostly because I want to revel in the joys of the nuanced political system that we enjoy here in Australia in comparison to other jurisdictions.

Thus, we'll be running a little ballot. The system will closely imitate the partial-preferential voting system that has been proposed as a refinement of our current method for electing Australian Senators, bringing upper-house votes in line with lower-house ones by allowing individuals to direct their own preferences whether they choose to cast their votes for parties en masse "above the line", or for individual candidates "below the line".

The beauty of this Australian system is that you can choose to direct your preferences if desired, so that even if your preferred candidate is eliminated your second choice still gets the benefit of your vote, and if your second candidate is eliminated the third gets your vote, et cetera. This means that your vote, provided that it is valid, will always be counted, and if you choose to allocate full preferences, it can never be exhausted and thus wasted on a candidate with no chance to win. And since we're electing for multiple places here, even if your candidate isn't the most popular, they might still win a place in the suitcase.

People from first-past-the-post systems think this is weird. But just imagine the situation for a hypothetical conservative voter in the in the UK election in May. Instead of having to vote for the lesser of two evils between the Labour Party and the SNP, you could rank your actually preferences and have them count for something! In a theoretical year 2016 AD in a US where Donald Trump runs as an Independent, you could rank him first and then the Republicans, and thus not disadvantage either by splitting their vote when compared to the Democratic candidate! Amazing, I know! And we've been doing it like this since 1918! There's some details about quotas and single-transferable votes and all that nonsense, but like most Australians, you don't really care how it actually works, so, moving on...

To facilitate a vote, I have sorted my tie pile into a selection of "parties", then ranked the candidates in each party and placed them on the ballot form available here. You may choose to either rank the parties in order of your preference (or just pick one if you don't like any of the others!) or rank individual candidate in order of your preference (as long as you vote for at least as many ties as there is room for in the suitcase). In other words, you can be a snob like I always am at elections and spend forever picking your favourite ties, or you can just select your favourite category, get the whole thing finished, and rush outside to the sausage sizzle.

The candidates for election have been collected below. The parties have been randomised, and the candidates in each party organised in order of party preference. (Yes, I know some eagle-eyed following will realise that some of my ties are missing, but I've collected all the ones that I can find!) 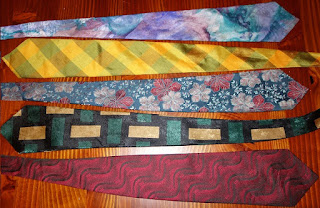 The Liberty Party (LIB)
The Liberty Party consist of those ties that are bright enough to make me smile every time that I see them, but just a little too bright to be appropriate in an office environment. They're wedding ties, mostly. 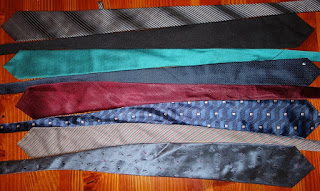 The Conservative Party (CON)
The Conservative party are dependable, solid manager types. The kind of ties that never draw comment. This isn't to say that they're boring, they're just the sort of tie that Bill Shorten would wear. The party leader, Polytetrafluoroethtielene, is Mrs. Owl's favourite. I'm not sure what that says about her. 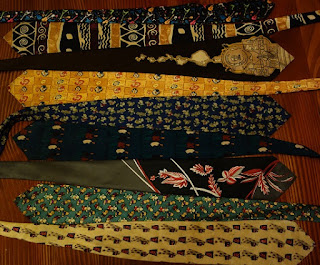 The Dad Party (DAD)
The Dad party is made up of the kind of ties that your dad used to wear in those photos from when you were a little kid, but now sit rotting in the back of the wardrobe.

The Christmas Party (CHR)
The Christmas party split from the Cartoon party after a bit of a falling out over how funny Christmas crackers are. They're the only party with a catchy campaign song. 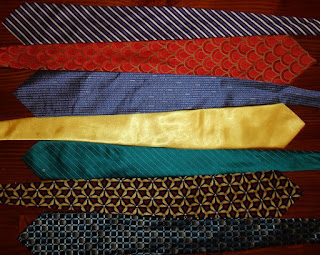 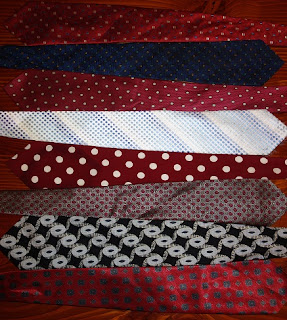 The Dotty Party  (DOT)
The Dotty party aren't really anybody's favourites, but they get a lot of support in rural areas. They've previously supported the Conservatives to form a government. 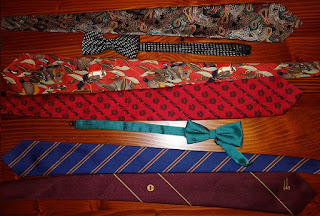 The U.N.C.L.E. Alliance (UNC)
The U.N.C.L.E. alliance is made up of the kind of ties that appeal to those weird uncles. There's the Aussie Tie Uncle, the Bow Tie Uncle, and the Uncle That Still Wears His School Tie. 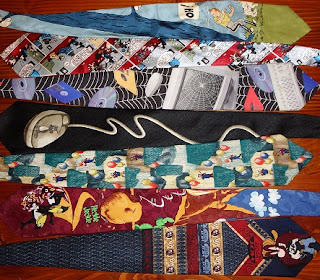 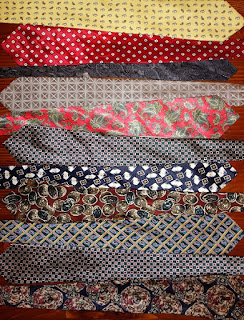 Since by visiting the site you've registered for voting, and in Australian elections all registered voters must do their democratic duty or risk a fine, you'd better consider your options and then go vote. This is the great moral challenge of our age, people.

Labels: another thing I care about and you don't, oh Max, politics, Squee, Ties, Too much time goes into this

Well that was fun. Any plan for those unfortunate ties that fail to make it into the Upper House? I mean suitcase?

Not yet. But I'm willing to take submissions

I'm going to take a while on this one because I think below the line voting will be important.

Might end up doing a lazy below-the-line. We'll see.

I might be able to recruit some additional voters for you as well!

There are many choices to make.
Antony Green would be disgusted by the size of that ballot.

I am so torn. While I would love to see you in Christmas ties all year round the bow ties make it such a hard decision!

What you gonna do with the ones left for the back bench?

Again, pretty late for the show, but the delegate for the United States of America would like to cast his vote for the Dad Party.