Through History with the Monday Quiz in Exile: The 1510's

It's Wednesday, so that means it's time for the Monday quiz. Congratulations are due to John, Bhagpuss and Ale for braving last week's quiz and for your scores of 7,5 and 5 respectively in what I'd thought was an extremely challenging week. For those of you who missed out, feel free to pop back to last week's quiz and try your luck before coming back and checking your answers below.
1. The last Aztec New Fire Ceremony was held in 1507. I am glad I was able to ensnare one person in the classic Aztec/Inca coin-flip.
2. The painting I was looking for was Da Vinci's Mona Lisa. Full marks to all.
3. The sculpture I was looking for was Michelangelo's David. Can you believe it was carved out of a piece of marble that no-one else wanted?
4. Columbus used a lunar eclipse to wow the people of Jamaica. Columbus was strictly an Atlantic Ocean guy, but I agree that the etching does have a Pacific vibe.
5. Dias was the first European to set foot on Madagascar, but pretty much everyone else beat him to it.
6. Pictured were the colourful outfits of the Swiss Guard, who've been protecting the Vatican City from crimes against fashion since 1506.
7. Guru Nanak found the founder of Sikhism. I knew nothing about Sikhism a couple of months ago, but it keep popping up all over the place at the moment.
8. Henlein's 1505 was the first watch, not technically a wristwatch but it's the idea of portability that's important, so I'll pay Ale the point. Clockwork itself is much older.
9. The garden of Earthly Delights is a Triptych. I thought this was a pretty hard question, but you lot are hitting the art ones out of the park this week.
10.The Atlantic slave trade began in the 1500's and continued until the 1870's. John was right on the button.

With that excellent showing I'm expecting some very impressive results in your comments this week as we dive in the 1510's, but as usual we appreciate the effort of giving in the good old college try rather than actually happening to arrive at the correct answers. 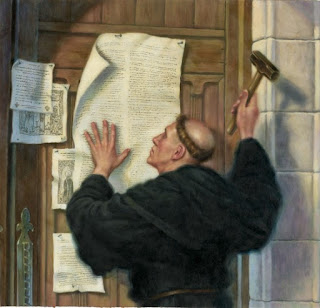 1) Who is pictured here, possibly apocryphally, in 1517, casually starting the Reformation?
2) From where were sunflowers, which have been domesticated since at least 2500BC, first brought to Europe in 1510?
3) Which astronomer, who wouldn't widely publish his theories until 30 years later, contradicted Ptomely's model of the universe in his Commentariolus in the early part of the 1510's?
4) In 1517, the Mamluk Sultanate was defeated by the Ottoman Empire, leading to 350 years of Ottoman rule of which modern-day country? 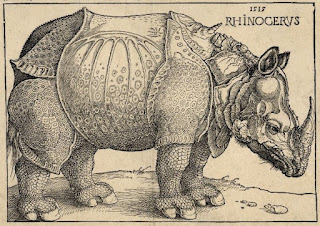 5) Which artist, who had never seen a rhinoceros, produced this woodcut in 1515 from a written description and a sketch from another artist?
6) Which modern capital city was founded by conquistador Diego Velázquez de Cuéllar in August 1515?
7) Which Archbishop of York was appointed both Cardinal by the Pope and Lord Chancellor by King Henry VIII of England in 1515?
8) Which political treatise, not publically available until the 1530's, was written following the author's arrest and banishment from Florence by the Medici family in 1513? 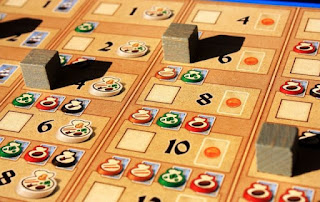 9) The Portuguese conquered Goa in 1510. We all know and appreciate the tight Euro strategy game with the same name, but...in which country is Goa, actually?
10) Considered one of the most important works of the Northern Renaissance, In Praise of Folly, published in 1511, was the work of which humanist?

1) A very aprocryphal look at Martin Luther there.
2) Given the surrounding events I’d imagine it’s from somewhere in the New World; let’s guess at modern Mexico?
3) Copernicus generally gets the cred for being the first serious heliocentrist with a convincing model backed by observations; I’m going to opt for that and hope he didn’t have a less famous forerunner!
4) Given both the fact that it’s the Mamluks and the timing of the Ottomans’ departure, I’m going to guess at Egypt.
5) Albrecht Dürer! It’s a pretty impressive rendering, all things considered!
6) Not going to show any imagination here, I’m just going to guess at Mexico City; I know it has some continuity with the Aztec city of Tenochtitlan, but I feel the timing’s about right for a Spanish replacement now, especially since I think it’s too soon for them to be grabbing huge chunks out of South America. I suppose it could be somewhere in the Caribbean, but let’s just stick to the continent.
7) There may have been more than one cardinal made Lord Chancellor by Henry, but I’m going to stick with the big famous one, Wolsley. It didn’t end well for him, did it?
8) This is surely The Prince; Machiavelli is synonymous with it these days, after all.
9) Goa is in modern India; right down south, I believe.
10) Unfortunately I don’t think I can come up with even an educated guess here. Assuming the title is naturally in English and not a translation, I’m going to guess at an English author - Thomas More, perhaps?


1. That's Martin Luther.
2. I associate sunflowers with either Central or South America. You didn;t ask for a specific country so I'm going to go for Central America.
3. Copernicus, I would imagine.
4. Hmm. I associate the Ottomans with Turkey so let's go for that.
5. Looks like Albrecht Durer to me. Good likeness.
6. Geesz. I have no clue. I've hard of de Cuellar, might even have seen a statue of him once, but I can;t keep any of the Conquistadors straight as to what countrys they decimated. Let's try Lima, Peru.
7. Hmm. Wolsey? He was a cardinal.
8. Macchiavelli's The Prince I would think. Still a best seller today.
9. It's in India. I've sold a lot of Rough and Lonely Plabet Guides to it over the years!
10. So not my area of expertise! Locke? Hobbes? Dates must be wrong on those. 1511 sounds early for humanism to me. Hmm... I got nothing... oh, wait... Erasmus? I'll go for him.

Really not expecting much out of this one.