Thanks to all the readers who've taken a swing at the cryptic crossword that I put up a couple of weeks ago, I've greatly appreciated the feedback and just getting your reactions to it has been a lot of fun. This post is (the first part of) a run-through of the various clues and their answers, which will hopefully include some explanations for anything that you weren't sure about and will also help me identify the puzzle's weak points so that I can improve in future. That obviously means that it will contain SPOILERS, so this is your last chance to go back and do the puzzle.

I'm not planning to go into a lot of depth here about how cryptics are supposed to work, but if you are interested in learning about that, I do recommend the 31 part series that Mother Owl put together back in Blaugust 2016. 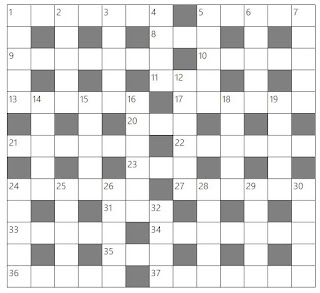 1 It can be changed or possibly silenced (7)
MUTABLE ~ Double definition (It can be changed / silenced[?] )
Double definition clues are always the first thing that I look for in a crossword, as words with two simple meanings like the answer to 29 down can be any easy way to get a foothold in the grid and the short clues are often easily indentifiable. Clues like this one, with one 'normal' definition and one slightly playful one (using mutable for 'able to be muted' isn't really proper English, after all), can be a bit trickier to notice, but hopefully the addition of the 'possibly' helps prepare the solver that I'm being a little sneaky here.

5 Folds away picked up evening wear (5)
Folds away = TUCKS ~ 'Tux' (Evening wear) homophone (picked up)
This is the first of an unusually high number of homophone clues in this crossword, which caused me to dig deep in my limited supply of good indicator words (I am pretty rusty at this, after all). I think 'picked up' is a nice definition for 'received' to indicate a homophone, though at last one solver didn't like it. It could be a little bit naughty to have the indicator slap bang in the middle of the clue where it's not obvious if it affects the folding or the evening wear, but since 'tux' doesn't have five letters I think it's fair enough.

8 Briton gives odd introduction (3)
Introduction = BIO ~ Regular letters (gives odd) from [B]R[I]T[O]N
It's always the short ones that get you. I found this one surprisingly difficult to clue without resorting to the usual double meaning clue. I'm not very happy with this one since 'gives odd' doesn't really imply multiple letters, it should have been something about 'gives odds' but I couldn't make it flow as nicely.


9 Method's missing from Mother Hubbard's  unconventional recipe for pie fruit (7)
Pie fruit = RHUBARB ~ Anagram (unconventional) of MOTHER HUBBARD with the letters of METHOD subtracted (missing)
Pretty much everyone who solved this got into contact to remind me that rhubarb isn't actually a fruit, which is an excellent point. Let's just pretend I'd make the straight part of the clue 'pie filling' so that we can just sit back and enjoy the anagram, shall we?

10 Buddhist principle proclaimed greater peace (5)
Buddhist principle = KARMA ~ 'calmer' (greater peace) homophone (proclaimed)
I know that with many accent calmer and karma aren't pronounced the same, but with my Aussie drawl they're pretty close. I'm not completely content with using 'greater peace' to mean 'calmer' when something like 'more peaceful' would have worked better, but I couldn't get it to scan into the surface meaning properly. I feel like this one is a clue that I would have reworked if I'd given myself more time to work on the puzzle.

11 Ask yourself introspectively "What is up?" (3)
What is up = SKY ~ Container (introspectively) for a[SK Y]ourself
The 'straight' definition for 'sky' here being "What is up?" is probably pushing it, too, but throwing a question mark in there hides a multitude of sins, and I can't imagine too many folks getting stuck on this three-letter word because of it.

13 Progressive loses final 2-0 to volleyballer (6)
Volleyballer = LIBERO ~ subtraction (loses) of AL (final 2) from LIBER(-AL) (progressive) + O (0)
I was a bit worried that this one was a little on the hard side, given that libero is a pretty obscure sports word from a relatively obscure sport, but it seems like people enjoyed it. I like the way that the clue is able to extremely specific about taking 2 letters away and adding an O all in one neat little package.

17 Love all and desire tea (6)
Tea = OOLONG ~ Charade O-O (love all #in tennis) + LONG (desire)
This was lots of people's favourite clue of the crossword, which I have to put down to the Leaflocker audience's love of tea generally, as I personally thought that the surface of the clue was pretty weak. It was fun to get people to translate love all to the tennis score 0-0 for the double-O on the start, and I think it helps that I was able to use 2-0 in the clue before to warm people up to the idea.

20 Won out this time (3)
This time = NOW ~ WON anagram (out)
Pretty common anagram-type clue. I'd be very surprised if this exact form hadn't appeared in other puzzles multiple times before.

21 Masterplan for gag order after a period (6)
Masterplan = AGENDA ~ NDA (non-disclosure agreement) after AGE (period)
How common is usage of NDA? I feel like it's on the border of common parlance, but probably seen in the wild often enough that it can be used in a simple charade clue like this. I wouldn't want to try and clue it as indirectly as 'gag order' if I were doing anything weird with it, but for these purposes I feel like it worked.

22 Coalition without a mandate is rudderless (6)
Coalition = TANDEM ~ Anag. (rudderless) of M(-a)NDATE missing (without) A mandate.
Not completely confident that this one is fair, as not only is tandem a bit of a weird definition for coalition (something that you do 'in tandem' could also be done 'in coaliation' but they don't really mean the same thing standing alone), but the wordplay is a bit sloppy, as it requires you to read 'without a mandate' as 'mandate without an a', which I suppose you could, if you squint. I'm also not completely sold on rudderless as an anagram indicator, but in the end I decided to let this one slip through just because the surface reading seemed like fun. Would 'coalition is rudderless without a mandate' have been fairer? Or should I have gone with something else entirely? What do you guys think?

27 Officer study subsequent to conflict (6)
Officer = WARDEN ~ DEN (Study) after WAR (Conflict)
Another pretty straightforward charade clue where I ended up cluing the last part first and then working my way back in order to try and have the surface reading be a little more interesting. I think it more or less worked, but having a word like 'subsequently' in there really telegraphs the wordplay too much and makes for an easy clue.

31 A handy place to fortify (3)
ARM ~ Double definition (A handy place / to fortify)
Another double definition with one punny meaning, handy places bringing back shades of groanworthy jokes about Napoleon. This one got an ! in the copy of the filled in crossword that my parents sent me, but I hope that was a 'ha ha' ! and not a 'see me' !

33 He has priors! (5)
ABBOT ~ Cryptic Definition
One of the things that got me writing this crossword in the first place was the over-reliance of my local paper on punny single-definition clues. This is the sort of clue that isn't really properly cryptic, as it doesn't have any wordplay element, the sort of thing that I'd expect to see in an American style crossword, or in one from before cryptics evolved into their current form, but I feel like they're fine in moderation, especially if the surface meaning really pops. I like this one a lot.

34 Release auditor's reckoning (7)
Release = EDITION ~ homophone (auditor's) of 'addition' (reckoning)
I couldn't resist the idea of an auditor as one who both plays with numbers and listens. Another clue with the indicator just dropped in between the elements, but since 'addition' is one letter too long I feel like most folk will stumble across this one pretty quickly.

35 Tallest test cut out everything (3)
Everything = ALL ~ TALLEST with TEST subtracted (cut out) (-t)ALL(-est)
Have I said yet that I hate cluing short words? Subtractions are a good way to do them but I feel like they can be hard to pitch at the right difficulty level. This grid originally had another big open space to the left of the first letter of this one, but in the end I cut it because it didn't reduce the number of three letter words I had to clue and was very constraining.

36 Iron Maiden and others (5)
Iron = METAL ~ M (abbr. of maiden in cricket) + ET AL.
I am in two minds about this one. You can't really get away with cluing a class of objects (metal) by one of it's parts (iron) in the way that can the other way around. In the end I decided to keep it just because I could sort of justify is as almost an &lit.clue, since 'Iron Maiden and others' are indeed fully metal and the clue is just a popper, but I don't feel good about it.

37 Hide 35 devastated by notorious stylist (7)
Notorious stylist = DELILAH ~ Anag. of HIDE and ALL (answer to 35 across)
The other clue that got an ! from my parents, but I think 'notorious stylist' works for the biblical character of Delilah, and has the nice extra bonus of including a red herring word like 'stylist' which just screams anagram indicator.

That's it for the across clues. This post is already getting pretty long, so I think I'm going to cut it off here for now and come back some time in the next few days to talk about the down clues. Please let me know in the comments if there's anywhere that I haven't explained things well or where you disagree with my assessments, as I really do want to make crosswords more often and I'm sure you all have some good advice to impart.